A SAMPLE OF OLD GREEK STENOGRAPHY 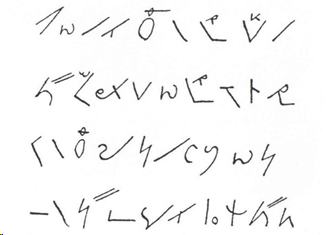 A SAMPLE OF OLD GREEK STENOGRAPHY

All the Church Fathers made use of stenographers, but no one got the idea that Jesus could have used them also.

Before World War II
In the year 1934 the British scholar H. J. M.  Milne published some documents with stenographical signs. The papyri with the signs had been found in the sand of Egypt and they showed examples of Greek stenography from the third century.

Some years later, in 1940, the German scholar A. Mentz also published about new stenographical signs. He had laid hand on a collection of nine old wax tablets, also found in the Egyptian sand. These tablets contained the so called Commentary with many signs a young boy had to learn.

A Steno Exercise Book
The Commentary belonged to a Christian boy. He scratched a short prayer in one of the wax tablets: “Jesus, let this finish.” It was certainly no easy task for him to learn all the signs.

“Blessed be the God and Father of our Lord Jesus Christ, the Father of mercies and God of all comfort; who comforts us in all our affliction.” (RSV)

Date of the steno text. From the Christian utterances on the wax tablets we can be rather sure that we have to do with Greek steno signs from between the second and the sixth century AD.

Explanatory Notes on the Sample

Remarkable Aspects
In the example we have 48 steno signs representing 122 letters of the Greek alphabet, for the writer a great reduction of work. The basic idea is that there is one sign per syllable.

Counting the syllables of the Greek words we get the result of 53 syllables and 48 signs. That has to do with the three great words: God (Theos), Lord (Kurios) and Christos (Christ). Only three capitals are used: Θ, Κ and Χ in line 1 and 2. That saved five syllables: eos, ur-ios and is-tos.

Observations
It is clear that the steno signs regularly do not represent all the sounds (letters) of the words. Look at the first word: εὐλογητὸς (eulogètos). It is displayed as the syllables: ευ  ω  η  τος  (speak: eu o è tos) missing the letters l and g (Greek: λ and γ).
This observation shows two things:

Stenography and the Synoptic Question
These features show that the writers of Jesus immediately after their stenographical task began with the arrangement of reports for the different target groups:

The reports were simply presented in three books: of Luke, Matthew and Mark. The writing of the Gospels occurred short after Pentecost in the Jerusalem Church. This is in a nutshell the solution for the Synoptic Question (How did the Gospels come into being?), which can only understood properly from the work of Jesus’s Servants of the Spoken Word (Luke 1:2), His rapid writers and stenographers.

New Testament
More about the untold story of stenography and the gospels in my book “Jesus’s Stenographers”.